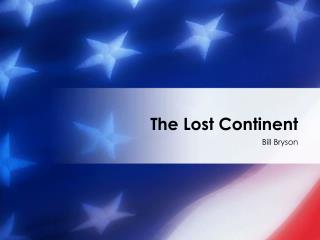 The Lost Continent. Bill Bryson. The Author. William McGuire “Bill” Bryson. Introduction. The Lost Continent is an account of Bryson’s 13,978 mile journey through 38 states in the autumn of 1987 and the spring of 1988. Bryson grew up in Des Moines, Iowa Moved to Great Britain

The Lost Continent of Atlantis - . the story of atlantis. atlantis was the domain of poseidon. cleito gave birth to five