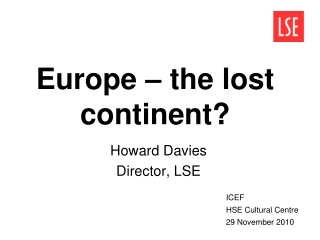 Atlantis: The Lost Continent - . by: amanda tyrrell and brianna nichols. this continent was covered many years ago by

A Troubled Continent - . a troubled continent . main idea : western europe was devastated by war in the 1300’s and

The Lost Populations of Eastern Europe - . notes for the week of may 25, 2009. with the collapse of communist

Partition of Africa - . jenna gilbert. africa. africa is a large continent. its 4x the size of europe there are hundreds

Ancient Europe - . geography of europe as a continent. europe is one of the worlds smallest continents, but has

Get to Know Greece: Geography - . greece is located on the continent of europe. it is in the south eastern corner of the

Europe in the 1920s - . germany. from the german point of view.  lost—but not forgotten country. into the heart you