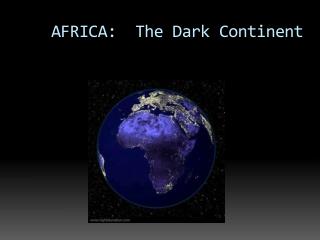 AFRICA: The Dark Continent. European Colonialism. Africa in 1914 was almost entirely controlled by European colonial powers, which had raced one another to acquire territory in the so-called "Scramble for Africa." Only Ethiopia and Liberia remained independent countries. Morocco - . audra polsky. geography in morocco. morocco is located on the continent of africa and borders with algeria,

Africa Test Review Game! - . which of the following statements is true about the population of africa? a. contains half

Name That Continent! - . name the continent!. the world’s largest desert , the sahara desert, is on this continent.

Empire Building Leads to World War I (The Great War) “Wars not make men Great” - . ss6h6 the student will analyze the