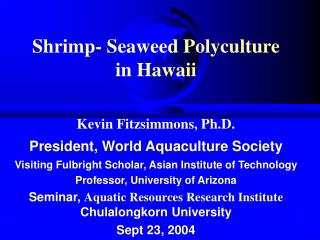 Seaweed - . looks like a plant but is really a protist…. background information. most seaweed is photosynthetic. some

SHRIMP - . john erickson, pe apga security and integrity foundation (sif) august 22, 2012. what is the security and

shrimp - . research fun facts and images of the brown shrimp. click on the link below. there are three interesting videos

A Seaweed Divided - . what touches each of our lives on land, determines the destiny of millions of aquatic organisms,

Pistol Shrimp - . by sarah turcotte. …. the pistol shrimp may only be 2cm long but can make a noise louder than