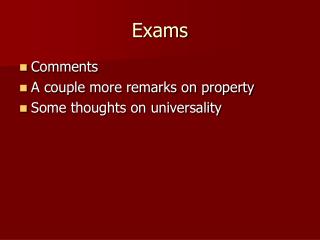 Exams. Comments A couple more remarks on property Some thoughts on universality. Reports. Sarah Burpo Sarah Spurgeon. The Right of Self-Determination. E. Roosevelt Covenants Gandhi Fanon. Eleanor Roosevelt. P. 284-87 What does it mean for a people to determine its own destiny? Organisational Communication Com 202-5 ( Essential for exams) - . “out beyond ideas of wrong doing and right doing

Comparing texts - . outcomes: to know and practice the skills needed for the exams. write a list of as many connectives