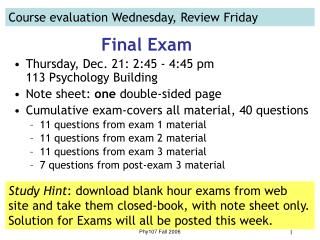 Final Exam - . team presentation. grading. final accounts for 20% of your grade. format. each group should have 2-4

Final Exam - Sarah kempfer. final exam. leadership. the puzzle shows all the things you need for good leadership this

Final Exam - . paul mcgrath. first … a little test. take out a sheet of paper. this is one last test of your

Final Exam - . kayla samkowiak. leadership. their eyes were watching god after reading about leadership, i learned that

Final Exam - . talk about kinds of holidays in different countries. each student in this class will have to be in charge

FINAL EXAM - . review slides. atomic theory. 1) what is the charge, positive or negative, of the nucleus of every atom?