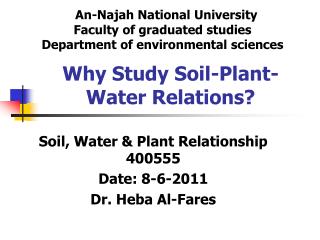 Plants - . roots. anchor the plant in the soil. suck up water and nutrients from the soil. seed. roots. leaves. they

Plants - . parts of plant. roots – take in water and mineral salts from the soil. they anchor the plant into the

Soil: One of Our Natural Resources - . charity i. mulig. soil. the portion of regolith that can support plant growth.

Chapter 6 - . importance of taking care. be careful when you select your plants. add water to the plant soil. place the

Lecture 3 Gas exchange and Water relations of Mediterranean sclerophylls - . aims: to consolidate the applications of