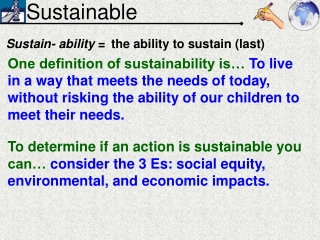 Sustainable. Sustain- ability =. the ability to sustain (last). One definition of sustainability is… To live in a way that meets the needs of today, without risking the ability of our children to meet their needs. PPS Update PAN Access Training - What you'll get from this training series. . . a ability to set-up and maintain your

“uphold or sustain” The observance of dharma enables humans to be contented and happy, and to save themselves from

Humanitarian Aid in Africa: A Question of Sustainability - . s ustain-ability: ability to maintain a balance without

Autism - . characterized by: abnormal social development failure to relate to others impaired language and communication

Explorers or… - . monday, 13 february 2012. aos for language papers. ao2 reading all students will be required to

Question 1 - . unlike the other planets in our solar system, earth has the ability to sustain life because of a unique