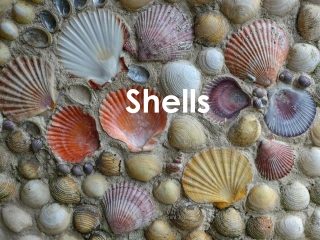 Shells. What are Shells?. What types of animals have shells? Shells are hard protective coverings worn on the outside of some animal’s bodies. Think about what shells are made of. Turn to your shoulder partner and discuss what you think makes up a shell. Shells - . university of maryland eastern shore jianhua yang. shell as a user interface. a shell is a command interpreter

Shells - . submitted by, s.supraja - 060138. shells . shells are surface structure made out of such inelastic materials

Electron shells - . electrons move rapidly around the nucleus in areas called shells. each shell can hold up to 8

Sea Shells - . who gave himself for us, that he might redeem us from all iniquity, and purify unto himself a peculiar

SEA SHELLS - . template. example bullet point slide. these templates are for personal use only and must not be

Unix Shells - . unix shells. command line interpreter once logged in, login gives control to a shell it prompts for

UNIX Shells - . cis 218. shells. • a shell is a command line interpreter that is the interface between the user and the

IPO Shells - Our legal team will form an ipo for you, then get the company listed to enable you to raise venture capital

The UNIX Shells - Shell. shell is the user interface to the operating systemfunctionality:manage files (wildcards, i/o

Shells and Domes - . shells. shell is a type of building enclosures. shells belong to the family of arches . they can be