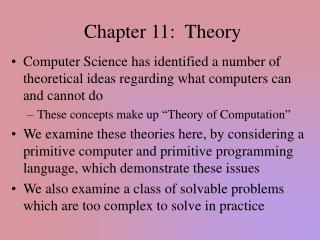 Chapter 11: Theory. Computer Science has identified a number of theoretical ideas regarding what computers can and cannot do These concepts make up “Theory of Computation”

Automotive Engines Theory and Servicing - . aut 112 chapter 22. objectives. after studying chapter 20, the reader will be

Chapter 9 - Pay for performance: the evidence. chapter 9. chapter topics. what behaviors do employers care about? what

Chapter 2: Fundamentals of Decision Theory - Good decisions : based on logic consider all available data and possible