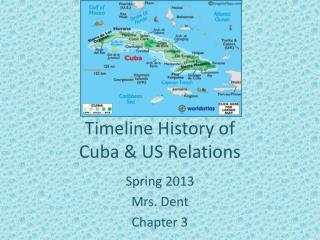 Timeline History of Cuba & US Relations

Timeline History of Cuba & US Relations. Spring 2013 Mrs. Dent Chapter 3. American Interest In Cuba. By the end of the 19 th century, Spain had lost most of its colonies Retained Philippines & Guam in Pacific Retained Cuba & Puerto Rico in Caribbean

Timeline History of Cuba & US Relations

Cruising to Cuba - The first u.s. cruise ship to arrive in cuba in decades received a warm welcome from havana residents

Obama visits Cuba - President obama makes a historic trip to cuba, the first visit by a sitting u.s. president since

Cuba-U.S. ties - After more than 50 years, the united states and cuba are set to restore diplomatic

The art of Cuba - The latest installment of the havana biennial art exhibit amid a thaw in u.s.-cuba

An American in Cuba - American delegations visit cuba as the u.s. eases restrictions with the communist

The Cuban Crises - . charlotte manzone . cold war followed suit after wwii primarily due to tensions between the us and

American History Timeline - . built-in glossary click on the underlined words to find out what the words mean. 40,000