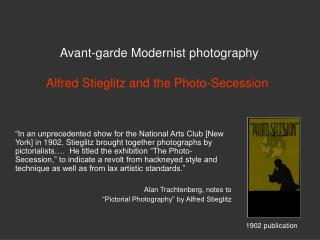 “In an unprecedented show for the National Arts Club [New York] in 1902, Stieglitz brought together photographs by pictorialists…. He titled the exhibition “The Photo-Secession,” to indicate a revolt from hackneyed style and technique as well as from lax artistic standards.”

Alfred Stieglitz - . stieglitz espoused his belief in the aesthetic potential of the medium and published work by

French Avant-Garde - . 1918-1930. goal: to explore cinema as art considered a cinema of “intellectuals for

Photo Secession - . leading to straight photography and later to constructivism , dada and surrealism history of

Miles Davis and Avant-garde - . the third stream. third stream and avant-garde. hard to distinguish between jazz and

Origins of The Avant-Garde - . origins of the avant-garde. to some observers, the postwar era in american theatre was a