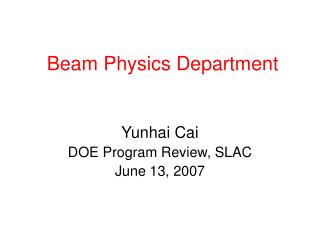 PHYSICS DEPARTMENT - . quantum?. quantum mechanics is the study of processes which occur at the atomic scale. the word

Physics Department - . academic foundation day september 27, 2007. what can you do? what are the research opportunities?.

Department of Physics - . safe use of class 3b and 4 lasers october 12th 2011 duncan mccallum health and safety