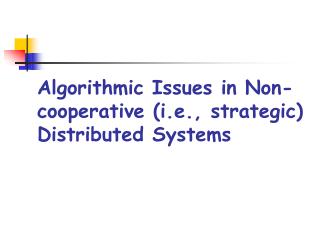 Algorithmic Issues in Non-cooperative (i.e., strategic) Distributed Systems Two Research Traditions Theory of Algorithms: computational issues What can be feasibly computed? How much does it take to compute a solution? Which is the quality of a computed solution?

STRATEGIC ISSUES IN RETAILING - . strategic issues in retailing. at the end of this module, the learning outcomes are

STRATEGIC PRICING ISSUES - . at the end of this module, the learning outcomes are: role of pricing as a strategic tool