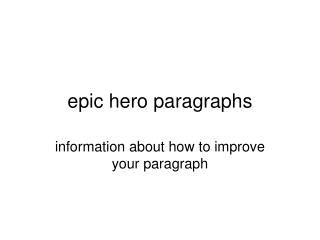 Improving Our Epic Hero Essays / Writing in General - . march 17, 2010. title. hardly anyone even tried to write a

Characteristics of an EPIC HERO - . the central figure in a long narrative that reflects the values and heroic ideals of

Epics and Epic Heroes - . bell work : ( 4-5 sentences) ! what makes a hero? what are four qualities a hero must possess?.

The Odyssey - . english i miss iz march-april 2012. epic story and epic hero. the epic is a long, narrative poem that

What is an Epic? - . in literature, an epic is a long narrative poem about an epic hero and the hero’s journey. the

Traits of an Epic and Epic Hero - . epics start in the middle – they often used flashbacks or a prologue characters

The Hero’s Journey - . the structure of an epic tale. epic -a long  poetic  composition, usually centered upon  a

The Epic, The Epic Hero, and The Epic World In Media - . prof. q ut arlington. the world of the epic. the iliad – the

The Epic Hero - . what is a hero?. epic |ˈ epik | adjective heroic or grand in scale or character: his epic journey

How to Organize Your Mock Epic - . begin with the invocation of the muse—choose a muse who fits with your epic hero

The Odyssey: An Epic Journey - . second semester marking period four the epic poem. students will consider…. how can

INTRODUCTION to EPIC POETRY - . an epic poem has …. a hero who embodies national, cultural, or religious ideals a hero

How to Organize Your Mock Epic - . begin with the invocation of the muse—choose a muse who fits with your epic hero