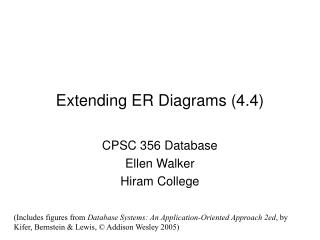 Ch5: ER Diagrams - Part 1 - . much of the material presented in these slides was developed by dr. ramon lawrence at the

Data Modeling with ER Diagrams - . what is an entity-relationship model? how is an e-r model represented as an e-r

4.4 - Adding and subtracting like fractions, least common denominator, and equivalent fractions. 4.4. fractions that