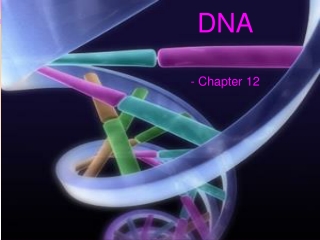 - Chapter 12. DNA. 12-1 Identifying the Substance of Genes. To truly understand genetics, we must understand the chemical nature of genes. 1928 - Frederick Griffith. Disease causing bacteria, caused the mice to develop pneumonia and die.

DNA and DNA Replication - . as you take notes, just write down the text that is in yellow. griffith’s experiment.

DNA - . section 12–1. this section tells about the experiments that helped scientists discover the relationship

DNA - . by c. kohn agricultural science waterford, wi. what is dna?. dna is deoxyribonucleic acid. it is kept in the

DNA - . try not to leave any behind – i dare you!. introduction. portions of the dna structure are as unique to each

DNA - . chapter 12. dna: the genetic material. the secret of life. think back…. gregor mendel and inheritance…

DNA - . deoxyribonucleic acid. the structure of dna (deoxyribose nucleic acid). a. dna is a macromolecules called

DNA - . the blueprint of life. dna. dna is located in the nucleus in the form of chromatin. it is made of units called