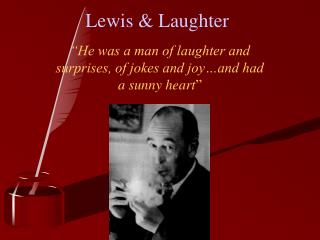 Lewis & Laughter “He was a man of laughter and surprises, of jokes and joy…and had a sunny heart ” What is humor? “The ability to perceive, enjoy, or express what is amusing, comical, incongruous, or absurd.” In a world of Christian rationalism, does humor have a place? If so. . .

Welcome ! - Laughter is the best medicine. an authority figure in what ways is laughter good for your health? laughter

A Man of Science &amp; Poetry The Life of Lewis Howard Latimer - . by danusia h. danko science 8. table of contents.