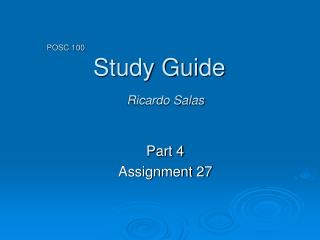 Bureaucracy - . posc 121 braunwarth. a “rational” bureaucracy. what pops into your head when you are asked about

Federalism - . posc 121 braunwarth. federalism. what is federalism? power is constitutionally divided between a central

What Government Does - . braunwarth posc 121. pre-course questions for consideration. please write out an honest response

POSC 3315 - . w12-2. history. why history matters path dependence what it means how it works “off-path” changes

Political Science 300 - . scope and methods of political science. the value of posc 300 - 1. i. learn research methods of