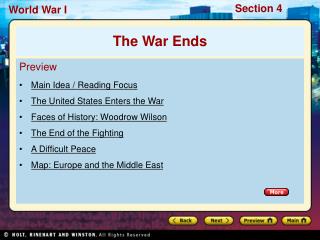 Preview Main Idea / Reading Focus The United States Enters the War Faces of History: Woodrow Wilson The End of the Fighting A Difficult Peace Map: Europe and the Middle East The War Ends Preview, continued The Costs of the War Quick Facts: Effects of World War I

The War Ends - . the main idea president nixon eventually ended u.s. involvement in vietnam, but the war had lasting

The War Ends - . the third reich collapses. well before the war ended the allies were aware that the germans were

The War Ends - . suspicions. european powers were initially weary about us entry into wwi. doubted their ability to raise

The War Ends! - . world war i. america was finally in – europeans celebrated in france and england mobilization in the

The Great War Ends - . 1917. things not looking good for the allies: offensives on the western front defeated russia

The War Ends - . from stalemate to armistice: the last years of world war i. stalemate on the western front. by 1918,

How the Cold War Ends - . in the ussr: nikita khrushchev (1953): destalinization for the soviet satellites: hungary (led

The War Ends - . american revolution. the war ends. the british turned to the south by late 1778 their goals were to

7.8 The War Ends - . when lord north, the british prime minister, heard about cornwallis’s defeat at yorktown, he paced