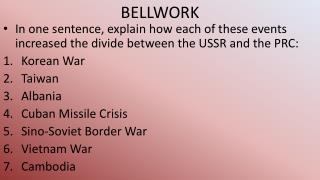 BELLWORK. In one sentence, explain how each of these events increased the divide between the USSR and the PRC: Korean War Taiwan Albania Cuban Missile Crisis Sino-Soviet Border War Vietnam War Cambodia. Sino-Soviet Split. Cultural Revolution. BELLWORK - . who were the “lost generation?” what did they write about? what was the national origins act of 1924?

Bellwork - . answer the following questions – do not write the question, only the answer 1. during the summer solstice,

Bellwork - . what do martha stewart, bill gates and donald trump all have in common? why do you think a company would

Bellwork - . looking at the pictures below, describe why you think cell’s got their name. history of cells. robert

Bellwork - . on a loose leaf sheet of paper, answer the following questions: in your perfect world, how would people

Bellwork : - . identify one way today’s society is similar to that of the 1920’s and one way it is different. the

Bellwork - . write the explicit equation for a geometric sequence where a 1 =-2 and a 5 =-32 write a recursive formula

Bellwork: - . determine whether each of the following is arithmetic (something was added each time), geometric (

BELLWORK - . read “peace at last” pgs. 536-537 and answer the following questions: why did russia withdrawal from

Bellwork - . what organelles are a part of the endomembrane system?. ch. 3- the cell. ch. 3.4- origin and evolution of

Bellwork - . imagine that you are traveling in madagascar when you find the plant to the left . you see that the plant

Bellwork : - . sauces “what keeps a tall building from falling over? please explain how or why ” events: tuesday

Bellwork - . who is represented in the cartoon? why is nuclear war portrayed as a monster? what historical event is this

Bellwork - Eng 9. bellwork. march 7. which of the following answers corrects the underlined portion of the sentence?.