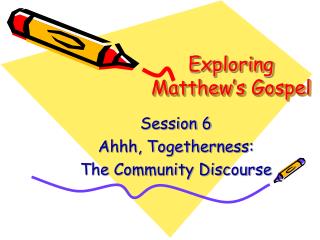 MATTHEW - . jesus is the promised messiah a handbook for christian living written by myron g. heavin edited by dr. john

The JOY of the GOSPEL - . apostolic exhortation evangelii gaudium of the holy father francis. i invite all christians,

The Gospel of John - . eusebius quotes his teacher and mentor, clement of alexandria. he says that the gospels containing

THE GOSPEL ACCORDING TO JOHN - . outline :. background literary structure john 20:11-18 on mary magdalene who is jesus

The Way of the Cross - . parish of sto cristo del calvario. first station jesus is condemned to death we adore thee, o

New ways of being Church for the sake of the gospel - Session 1. bob &amp; mary hopkins + sally gaze. new ways of