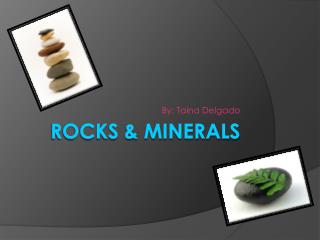 GEOLOGY, MINING, AND PROCESSING OF THE INDUSTRIAL MINERALS - . virginia mclemore. class requirements. goals in this

Rock Forming Process, the Rock Cycle, and THE Rocks - . review of minerals. what are the four characteristics of a

Identification and Classification of Sedimentary Rocks - . terrigenous clastic sediments and rocks. no “simple”

Sedimentary Rocks and the Production of Sediment - . sediment and rocks formed at the earth’s surface . sedimentary

Vitamins and Minerals: What , When and How Much to Supplement - . elin zander , rd, cd, cnsd. learning objectives. the

Unit #2: Rocks, Minerals, and Resources - . rock - a naturally formed solid piece of the earth ’ s crust composed of a

Weathering and Erosion - . what is weathering?. weathering is process of breaking down and changing of rock at or near

MINERALS AND ROCKS IN THE EARTH’S CRUST - . igneous, sedimentary, metamorphic rocks and environments. minerals and