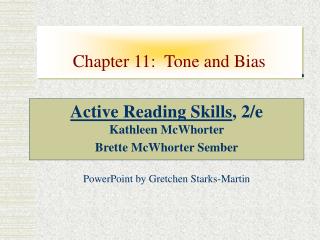 Chapter 11: Tone and Bias. Active Reading Skills , 2/e Kathleen McWhorter Brette McWhorter Sember PowerPoint by Gretchen Starks-Martin. A writer’s tone is his or her attitude toward the subject. A writer’s bias is the expression of an unfair preference for or dislike toward a subject. Sensitivity versus response bias: Psychophysical techniques - . the experimental context. the kinds of questions you may

Brainstorm: - What is bias? what causes bias? when do we experience bias? how does bias influence the delivery of

Tone - . what is tone? the manner in which something is said rather than what is said. tone may be playful, formal,

Bias - . in journalism. what is bias?. bias is a term used to describe a tendency or preference towards a particular

Tone in Poetry - . review our knowledge of tone and take notes on how to identify tone. identify tone within a selection

Example: Tone = somber I chose this word because… - Use your “tone words list” to find a tone that describes each

USING DIDLS TO FIND TONE - . tone. the attitude a writer takes toward the reader, a subject, or a character. tone. tone

Bias, Assumption and Viewpoint - . a bias is a strong leaning in either a positive or negative direction. a bias is very

Tone - . version 2. definition. tone is the feeling one gets when reading a work of literature. any human emotion may

Conservative/Liberal Bias - . topics:. does political bias truly exist? if so, how pronounced is it? what are the

Mood and Tone - . the subtle differences…. tone = style or manner of expression in speech or writing. tone : formal ,

Bias and Fallacy - . how to recognize it in others’ work and avoid it in your own. bias. bias means holding opinions

Arts and Media: Media Bias - . objectives: to understand what the terms ‘media’ and ‘bias’ mean to discuss the