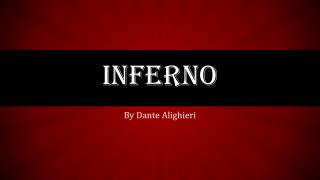 Inferno. By Dante Alighieri. Dante Alighieri’s life. Born in Florence, Italy in 1265 Family of old lineage and noble birth but no longer wealthy Arranged to marry Gemma Donati when he was 12 years old Eventually married and had two sons and one daughter Inferno - . cantos iv-v. virgil. one of the virtuous pagans “’the pain of these below us here, drains the

The Inferno: Into the Inferno - . feraco myth to science fiction 27 october

Dante's Inferno - . catos i, ii, vi, and xxxiv. about dante. married gemma di manetto donati , but claimed to be in love

Dante’s Inferno - . circles 8-9. why might dante have classified diviners, astrologers, and magicians as committing

Dante’s inferno - . reading ppt. canto i . opens on the evening of good friday in the year 1300. traveling through a