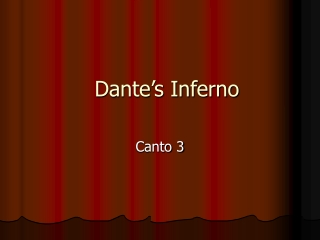 Dante s Inferno - The dark wood. midway in our life's journey, i went astrayfrom the straight road and woke to find

The Inferno By Dante Alighieri - . pre-reading assignment. rank the following actions from least offensive to most

Dante - . inferno. oooh…scary !. before we begin our journey into the depths of dante’s hell…. what other

The Divine Comedy Dante’s Inferno By: Dante Alighieri - . by: brittany donaldson. irony. this made dante alighieri’s