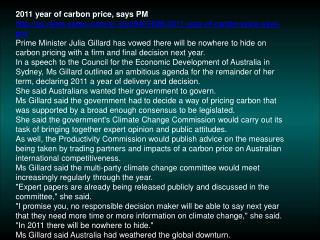 2011 year of carbon price, says PM http://au.news.yahoo.com/a/-/mp/8407606/2011-year-of-carbon-price-says-pm/ Prime Minister Julia Gillard has vowed there will be nowhere to hide on carbon pricing with a firm and final decision next year. Carbon taxes - Reducing carbon-dioxide emissions by putting a price on carbon - . welcome !. the rise of the c tax and

PM Modi unveils 'Statue of Unity', says lakhs of farmers helped build it - The rs 23.89 billion monument is a tribute to