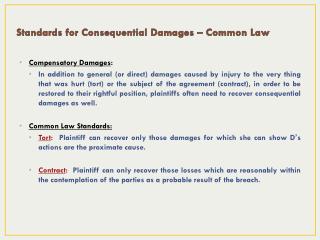 Common Core Standards - . the standards define what all students are expected to know and be able to do, not how teachers

Common law - . &quot;the duty to keep a contract at common law means a prediction that you must pay damages if you do

Consequential Damages A refresher on consequential damages - . t.bowen 7 december 2011. purpose. the purpose of this

Common Core Standards - The common core state standards: opportunities and challenges for the mathematical education of