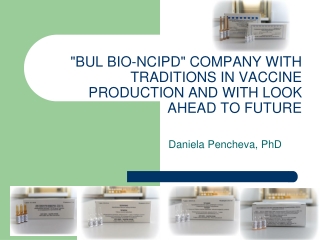 "BUL BIO-NCIPD" COMPANY WITH TRADITIONS IN VACCINE PRODUCTION AND WITH LOOK AHEAD TO FUTURE. Daniela Pencheva, PhD. TRADITIONS http://bulbio.com. BB-NCIPD Ltd. - commercial company, 100% state-owned , belongs to the  Ministry of Health of Bulgaria , with over 130 years history.