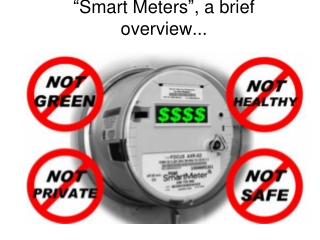 “ Smart Meters ” , a brief overview. My story with wireless devices and infrastructures. VOLUNTARY Cell phone, cordless phone, WIFI, (depending on if you are at work or Starbucks, etc., then it is involuntary) INVOLUNTARY Cell Towers Smart Meters WIMAX Clouds Reforming public utilities - 2. why focus on public utility reform?. most people remain served (or not) by public