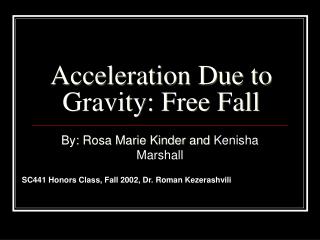 Acceleration Due to Gravity: Free Fall Acceleration Due to Gravity: Free Fall. By: Rosa Marie Kinder and Kenisha Marshall . SC441 Honors Class, Fall 2002, Dr. Roman Kezerashvili. Objective. To verify that the displacement of a freely falling body released from rest is directly proportional to the square of the elapsed time.

Acceleration Due to Gravity: Free Fall

General Relativity Part I: Gravity is Acceleration - . 1) you are in an elevator. suddenly, the cable snaps and the

1-Dimensional Vertical Motion - . free fall - an object dropped from the surface of a planet in the absence of air

Tueday, Mar. 11 Do Now - . what is free fall?. -free fall is the motion of an object being acted on only by gravity.

Gravity!!!! - . gravity. gravity – the attraction of one mass toward another depends on the masses of each and their

Gravity and Free Fall - Chapter 5 section 5c. gravity and free fall. the law of gravitation. 1. anything that has mass is

T&amp;J Ballin - . fail!!. trent could not dunk because gravity was holding him down. free fall. the ball and myself