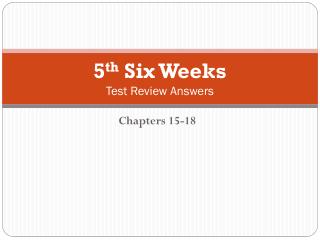 4 th Six Weeks Test Review - . a narrow waterway is a strait example strait of gibraltar. items that are scarce tend to

Review for Third Six Weeks Test - . constitution handbook and ch. 9. what document do these apply to?. cannot enforce

4 th six weeks exam Review - . share croppers and slaves could only work for their landlord. an increase in commercial

Review for 1 st Six Weeks Test - . type the words that you see and then we will go into our notes for the definitions.

Verb Six Weeks Test - . english. action verbs. the director shouts at the members of the cast. the lights are flashing

1st Six Weeks Exam Review - . which of the following regions typically receives the most precipitation and has the