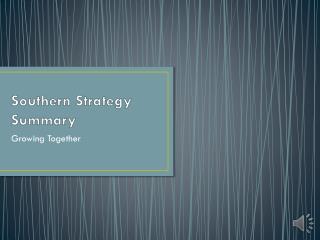 Southern Strategy Summary. Growing Together. Southern Strategy Committee. Brad Ott , facilitator Ken Kenegos Rita Valenti Cathy Courtney Peg Nosek. What makes the South worthy of a strategy?. How is it different from the rest of the country?. Education . IceCrown Citadel Strategy Summary - . intro. this is intended as a primer, a basic summary of what you should be aware of