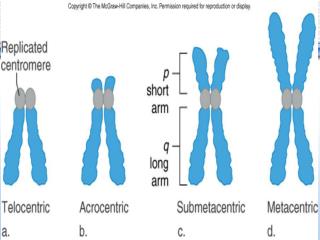 ANEUPLOIDY. Having too many or too few chromosomes compared to a normal genotype Aneuploid organisms have unbalanced sets of chromosomes due to an excess or deficiency of individual chromosomes This creates an imbalance among the genes and causes an abnormal phenotype or even death. ANEUPLOIDY.

10.2 Nondisjunction &amp; Karyotypes - . disjunction. the normal separation of chromosomes in meiosis i or sister Towards Early Biochemical Screening for Fetal Aneuploidy in the First Trimester

Gene Mutation vs Aneuploidy (competing theories of cancer) - “wherefore by their fruits ye shall know them.” jesus,

Chromosomal Variations - . this presentation will look at alterations in chromosome number and specific syndromes that

nt and aneuploidy - . . monosomics for all human autosomes die in utero. a sex-chromosome monosomic complement of 44