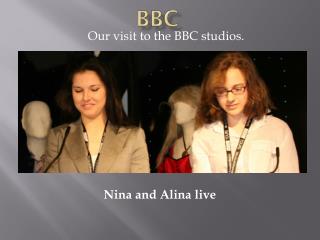 BBC. Our visit to the BBC studios. Nina and Alina live. Introduction. BBC - . by: kait anderson. what as the bbc?. the bbc is the   british broadcasting company the bbc was a radio station.

BBC ONE - . david hildick-smith sussex cardiac centre brighton, uk on behalf of the bbc one investigators. bbc one. the b

bbc.co.uk/news/world-asia-pacific-12729485 - The official death toll to about 2,800 but the miyagi police chief has said