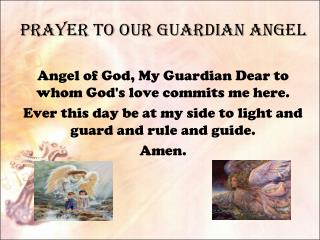 Prayer to Our Guardian Angel Prayer to Our Guardian Angel. Angel of God, My Guardian Dear to whom God's love commits me here. Ever this day be at my side to light and guard and rule and guide. Amen. . Announcements. Class t-shirts Exam IV: Tuesday Oct 5 th

Prayer to Our Guardian Angel

What is prayer? - . prayer is the language we speak with god. what is prayer?. intercession – latin: intercedo = come

Maturity Through Prayer - . ro. 12:12– be faithful in prayer col. 4:2– devote yourselves to prayer prayer is one

PRAYER AS WORSHIP TO GOD - . jesus taught his disciples to pray matt 6:5-13. the early disciples continued in prayer so

With your Host Guardian - . with your host guardian. genesis. exodus. leviticus. deuter-onomy. joshua. who pun it. $100.

THE NUMBERS FROM 10 TO 20 - . guardian angel prayer. angel of god, my guardian dear, to whom god's love commits me here;

Prayer - Bible study. prayer. what is prayer to you? . “ is prayer your steering wheel or your spare tire?” corrie

PRAYER - . praise and adoration. “our father in heaven, hallowed be your name” matthew 6:9. intercessory prayer.

Prayer - . prayer. what is a basic definition of prayer? raising requesting to what two types of prayer is each christian

Never Drive Faster Than Your Guardian Angel Can Fly and Other Thoughts on Highway Safety March 28, 2007 - . sara saulcy,