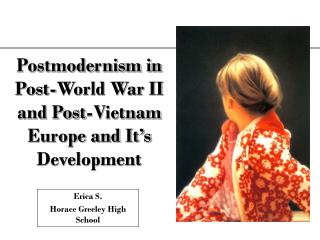 Post World War I Europe - . 1918-1929. objective. to understand the international order after world war i to understand

Post-World War I Society - . albert einstein the theory of relativity, e=mc2. what does it all mean????. sigmund freud

Post World War II - . what were some of the lingering issues at the conclusion of wwii ? and how would they be solved?.

Semiotics, Post-Structuralism, &amp; Postmodernism - . a primer for the reading of white noise. at it’s core:

Post WW2: - . refugees made the united states the center for creating music post ww2. even composers born in europe spend

The Lie of This Age - . postmodernism on the college campus. what is postmodernism?. a philosophy or worldview