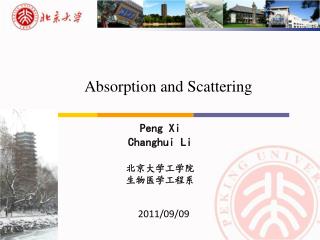 Absorption and Scattering. Peng Xi Changhui Li 北京大学工学院 生物医学工程系. 2011/09/09. The Propagation of Light. The processes of transmission, reflection, and refraction are macroscopic manifestations of scattering occurring on a submicroscopic level. Absorption and Scattering - . definitions – sometimes it is not clear which process is taking place. absorption and

Scattering and Absorption - . how does the color of the aerosol affect the light energy hitting it?. photo: l. harkness.

Adsorption and Absorption - . adsorption process by which a solute accumulates at a solid-liquid interface absorption

Digestion and Absorption - . digestion. the breaking down of food into nutrients to use or to pass necessary step in

Absorption and Stripping - . some important definitions. in distillation, heat drives the separation of the more volatile

Absorption and Secretion - . learning outcomes. identify the structure and properties of the cell wall. identify the

ABSORPTION AND METABOLISM - . the results of digestion. through the digestive process, the macro- nutrients are broken

DIGESTION and ABSORPTION - . learning objectives: understand the physical and chemical processes of digestion learn the

ABSORPTION - . what is absorption?. absorption is the transfer of one or more materials from the gas phase to a liquid