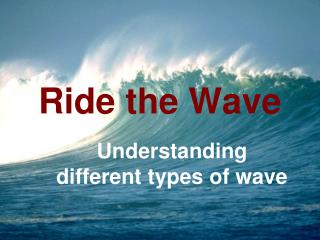 Ride the Wave. Understanding different types of wave. Good, good, good, good vibrations!. http://www.youtube.com/watch?v=NwrKKbaClME. Waves are created when a source of energy (force) causes a __________. So what are vibrations? Ride the Wave to Saddleback College

How to Ride a Wave - . you have to see the ocean . what’s the big picture? where are you headed? where do you think the

Ride the Wave back to North Side Elementary - . as a member of the 2007 5 th grade class at north side elementary school,

Prepare to ride the financial wave the rest of your life - . presented by floretta e.reed. how do you get started?

THE Great Ride - . your search ends and the journey

The Bus Ride - . why are you here ?. 6 stops on today’s bus ride introducing brevard public schools sharing our budget

Ride The Mainstream! - . “a tightly circumscribed project” as introduced on www.themainstream.info with an invitation

The Perfect Ride - . providing superior service for passengers with disabilities. the right to travel. civil

The bike ride - . turn your sound. click manual. in the beginning i saw god as an observer, who never failed to see the

The wave - . super quiz! get into four teams. team one. what is the author’s name? bonus point for the real guy’s