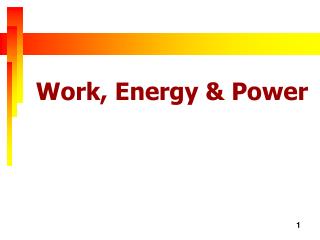 Work, Energy & Power. Work. What does WORK mean to you? Are you doing WORK when… Lifting weights? Walking with a big bag of grocery in your hand? Completing your homework assignment? Writing an essay?. Physics concept of WORK.

Energy, Work and Power - . aim: how do objects store and release energy?. work. when a force moves an object, it is doing

Work, Energy, Power, and Machines - . energy. energy: the currency of the universe . just like money, it comes in many

Energy, work &amp; power - . energy. the ability to do work or cause change typically expressed in units of joules

Work, Energy, Power - . what’s the difference?. force is the agent of change energy is a measure of change work is a

Energy and Power - . by: alexander respondek. what is energy?. energy is what we need to do work or cook or play. kinetic

Energy and Power - Combine energy – conservation – power into 1 summary sheet!. energy and power. energy is the

Work, power and energy - . warm up 5/2/12. what is the first law of motion? which formula is associated with the 2 nd law

Work, Energy, and Power - . there are a lot of advantages of knowing some physics but this one is definitely not one of

Work, Power &amp; Energy - . explaining the causes of motion in a different way. work. the product of force and the

Unit IV: Work, Energy, and Momentum - . essential questions:  what is work?  how is work related to energy? 

Electrical Power - . chapter 19 section 3. energy to power. electrical power is the rate of conversion of electrical

Energy, Work, and Power - Unit 5. energy, work, and power. energy is the capacity for an object to do work for example,

Energy, Work, and Power - Unit 3. energy, work, and power. energy is the capacity for an object to do work for example,

Title - . all about energy. energy work and power. define energy what is si unit used to express energy? how are energy,

Solar Power - . by team b talynne , eileen, andren , marc, and bea. what is solar power?. solar power is what it sounds.