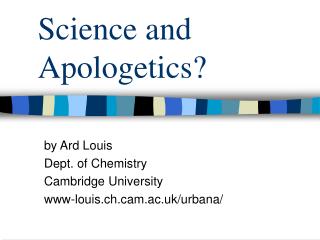 Apologetics 101 - . where are you coming from?. paleo -orthodoxy. searches for “what was once believed everywhere,

FWC School of Apologetics - . an in-depth program that aims to equip believers to give answers for why they believe what

Christian Apologetics - . is there a god?. b: is a field of christian theology that aims to present a rational basis for

Apologetics 101 - . “ why every christian needs an apologetic.” . the scriptural mandate. 1 peter

Science versus God - . “but in your hearts set apart christ as lord. always be prepared to give an answer to everyone

Varieties of Apologetics - . 3 schools of thought presuppositional apologetics emphasizes the importance of

Apologetics and Worldview - . what is the biblical basis for apologetics?. arguments based on j.p. moreland’s lecture

FWC School of Apologetics - . an in-depth program that aims to equip believers to give answers for why they believe what

H o p e - . why apologetics? the defense of the faith. hurting. for the. a study in 1 peter. www.confidentchristians.org.

Apologetics - . was jesus mistaken about an early second coming?. did jesus teach he would return soon?. matthew 10:23