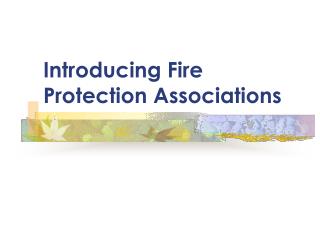 Introducing Fire Protection Associations. Reasons for FPAs. Co-operation among rural owners and managers of land is required for the effective management and prevention of veldfires. Fire Protection - . portable fire extinguishers § 1910.157. objectives. in this course, we will discuss the following:

Fire Protection - . john giefer. statistics. in the drilling industry 25% of all inspections found violations of 1910.157

Fire Protection - Personal safety is a priority. get prepared for any fire emergency situation with fire training manager

Industrial Fire Protection - . sand no. 2012-1755c sandia is a multiprogram laboratory operated by sandia corporation, a

VICTORIAN FIRE PROTECTION - As we know that the u201cfire is truly a living thing, it consumes fuel and oxygen, produces