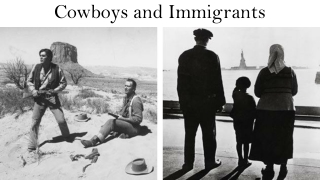 Cowboys and Immigrants. Warm-up. Write one characteristic of the New England, middle, and southern colonies. What was wrong with the Articles of Confederation? What was the Battle of the Alamo? How did Andrew Jackson represent the “common man”? Cowboys and Indians - . by r eece c ulliton and darragh kelly barry. billy the kid. billy was born on the 17 th

**Cowboys - . regulation of water intake. signals from the brain (hypothalamus) dry mouth motivate the consumption of

Cowboys and Railroads - . the cattle industry becomes big business. as the herds of buffalo disappeared, horses and

Cowboys and miners - . mrs. dixon’s class. cowboy life. by the end of the civil war, there were five million head of

Cowboys and Cattle - . large spanish/mexican ranches existed in northern mexico and texas the 1 st cowboy was the spanish

Cowboys - . genre- the genre is narrative non-fiction michael,blaise,allen,robert ,. main idea. the main idea is about

Cowboys, Ranchers and Farmers - . how did joseph g. mccoy and the kansas pacific railroad impact the cattle industry?