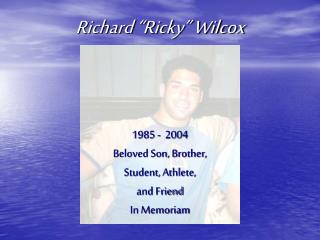 Macroeconomics - . james b. wilcox resources provided by: the university of southern mississippi center for economic and

Officer Richard Neil (retired) - . 3-5 child abuse &amp; neglect. this is a hard topic area for anyone!. it should

Prayer - . finding the heart’s true home based on the book by richard j. foster. the ideas and concepts of this