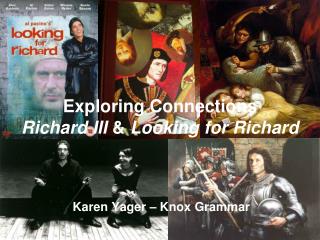 Exploring Connections Richard III & Looking for Richard. Karen Yager – Knox Grammar. MOD A Concepts. Connections: The relationship between texts in terms of context. Contextualisation: The effects of social, historical and cultural context and questions of value on texts. Richard - Goal summary business strategy. richard. goal . to provide the special and surprising gifts to the guest and

Richard III - . by william shakespeare. overview: aspects of the play we will be studying. richard the character the