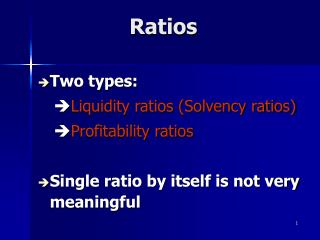 Ratios. Two types: Liquidity ratios (Solvency ratios) Profitability ratios Single ratio by itself is not very meaningful. Liquidity Ratios. Measure the short-term ability of the business to pay its debts. WHO CARES? Short-term creditors such as bankers and suppliers. Ratios - . by edith henderson beech springs intermediate school grade 5 http://www.spart5.k12.sc.us/. what is a ratio?. a

Ratios - . unit 2 practice. carlos has 4 tennis balls and 5 baseballs. using your colored tiles, create a model of this

Ratios - . june 4, 2009. euler product. to get the ratios conjecture. follow the recipe for moments replace the

Ratios - . regular textbook page 402-406. objective. i can use ratio language to describe the relationship between two

Ratios - . by: nick borja. financial efficiency ratios. assess how efficiently the assets/resources of a business are

Ratios - . what does a ratio do?. a ratio compares values. it tells us how much of one thing there is compared to

Ratios - . june 4, 2009. euler product. to get the ratios conjecture. follow the recipe for moments replace the numerator

Ratios - . a ratio is a comparison between two amounts. there are three ways to write a ratio: a:b a to b order matters!.

Ratios - . mohamed is making orange squash. the instructions on the bottle state that he should use one part orange to

Ratios - . objective: learn to identify, write, and compare ratios and rates. ratio. what is a ratio? a ratio is a

Ratios - . common core standard ccss.math.content.6.rp.a.1 understand the concept of a ratio and use ratio language to

RATIOS - . writing, simplifying, and equivalent. ratios. is a comparison of two quantities. there are three ways to write

Ratios - . what is a ratio?. a ratio is a way of writing how much of something there is compared to another thing.