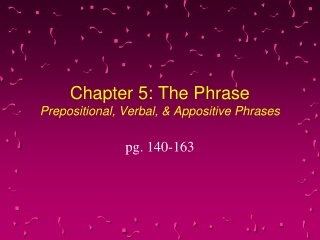 Chapter 5: The Phrase Prepositional, Verbal, & Appositive Phrases. pg. 140-163. What is a phrase?. A phrase is a group of related words that is used as a single part of speech and DOES NOT contain BOTH a verb and its subject. Prepositional phrase Participial phrase Infinitive phrase