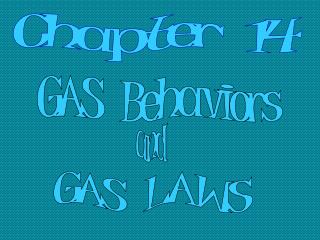 Chapter 14. GAS Behaviors. and. GAS LAWS. Kinetic Theory of Gases. States that gas molecules are in constant motion AND each gas molecule has no volume as a gas particle has no attraction between particles has perfectly elastic collisions (no Energy lost).