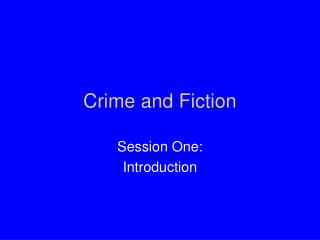 What is SCIENCE FICTION ? - . a kind of writing that lies somewhere between realistic fiction and total fantasy. what

The Nature of Crime - Understanding crime and victimization. the nature of crime. question:. what causes crime? five

Historical Fiction - . to write historical fiction, you need to draw on sources, facts and information. tonight’s

Science Fiction - . what is it? . fiction . first of all, fiction is any piece of work that was invented by the author.

Fiction - . fiction:. a form of writing that tells a story. fiction is made up, not true. there are several different

GENRES - . a genre is a text category defined by style, content, and form. there are many types of genres, here are some