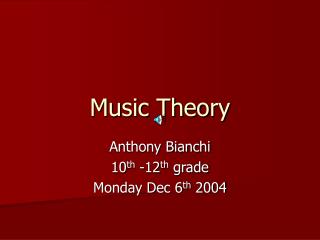 Music Theory - . melody. melody. the first that appears at the beginning of every staff is a clef symbol. the clef tells

Music Theory 101 - . snack theatre 2013. the beginning. a staff is made up of five horizontal lines and four spaces a

AP Music Theory - . elements of music: pitch. ib and ap. this class will get you through the material you will need to

Theory of Music - . the theory of music has been developed to systematize the practice of music. components of music.

AP Music Theory - . chapter 2 – part 3. tonality. organized system of tones in which one tone (the tonic) becomes the